Calvin Strachan | A counterintuitive tip to close a deal when you are under pressure
Over the span of my career I've held many roles, most of which required me to perform under massive pressure.
16737
post-template-default,single,single-post,postid-16737,single-format-video,do-etfw,ajax_updown_fade,page_not_loaded,,footer_responsive_adv,qode-theme-ver-17.2.0,qode-theme-csc,qode_header_in_grid,wpb-js-composer js-comp-ver-5.6,vc_responsive

Posted at 23:50h in Performance Under Pressure by Calvin Strachan 0 Comments

One of the most counterintuitive ways to get better under pressure is to back off a little bit. When the pressure’s up, what do you tend to do? You tend to grab on harder, try harder and push with more effort. Right? Everyone does. Your mind is racing. You want to make sure you don’t mess up. But when you’re trying to do better under pressure, it actually hurts you. So, what I want you to do is to back off a little bit.

Let’s use the example of building a muscle 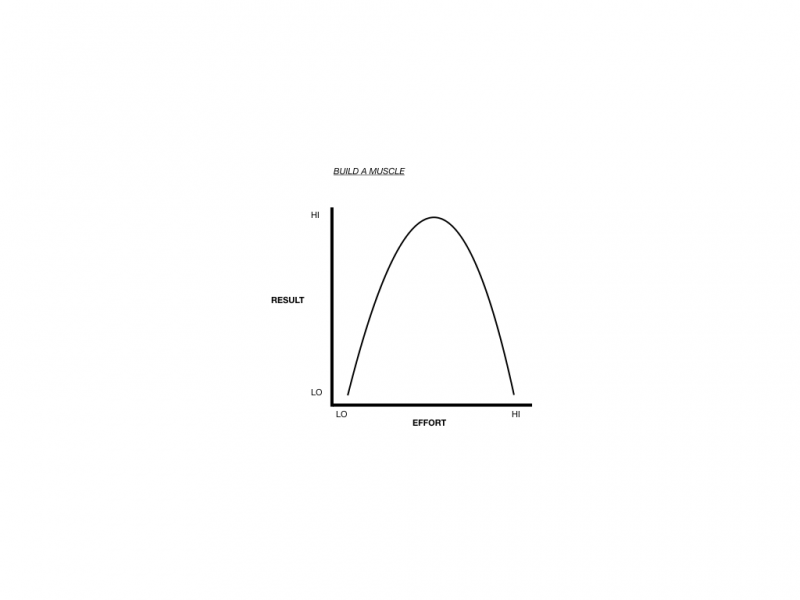 If you were actually trying to build a muscle, and you put in low effort, what happens? You get low results, obviously.

But as you increase your effort, your results get better. However, all of a sudden, if you put in too much effort, what happens? Your results come down because you are susceptible to injury and fatigue. Also known as over training.

In short, if you train very little, you will experience low results, there’s a certain sweet spot where it’s perfect, and then as you put too much effort, uh-oh, things fall apart.

So think about this. Applying the same analogy, but now think about closing a deal. An important deal and you have to make sure this happen. You have to nail this business! When you create the same graph and you add LO result, HI result, and LO effort, HI effort; notice what happens if you put in too little of an effort to close the deal. 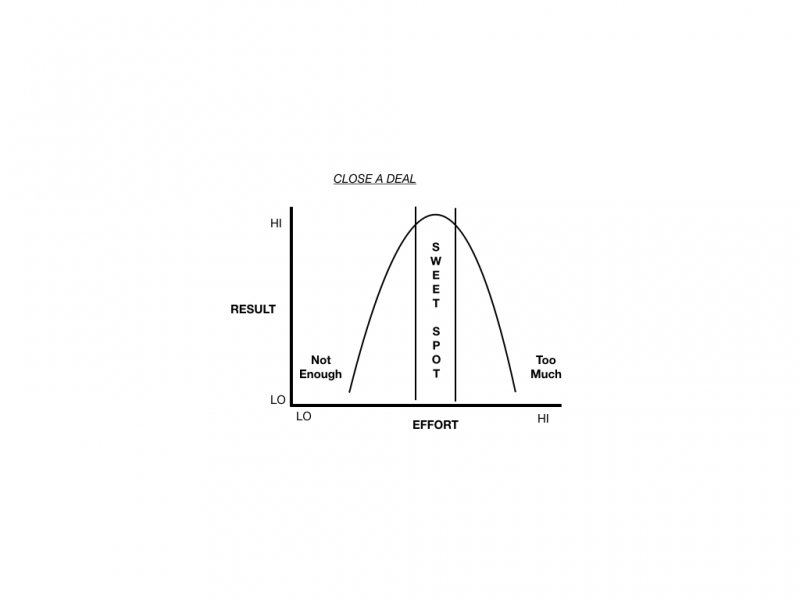 No results. You don’t close the deal.

As you try to put in more effort, for example you might do more homework and more preparation. Consequently your results would get better. But at a certain point you get tight, and you’re putting in way too much effort. You’re trying way too hard now, and you start saying too much, adding too much, and you’re making mistakes. All of a sudden, uh-oh, your results go down.

I acknowledge the importance of getting it right and winning the business, but if you put too much effort in, you will bring your results down. Why? Because you’re talking too fast; you’re adding too much, and you’re not paying enough attention to the client. You’re making too many mistakes. Also, on the opposite side if you don’t do enough; for example you get too passive and get too lazy with your efforts; you will lose the business. So, the idea of getting better under pressure is you have to hit the sweet spot.

The question becomes how do you do that?

And they will typically respond with: “How dare you. Relax? Come on. I got to win the business.”

Then I’ll respond by saying “I know. But if you try too hard, you’re going to miss. Just slow down a little bit”.

When I was a kid, I used to run track and I was undefeated from kindergarten to grade seven. Woo-hoo! Anyways…one time we had a university track athlete who was an All-Canadian come to our school, and talk to us about sprinting.

I was a sprinter, specifically I ran the 100 metre races and I was always tight. I was nervous, as you could imagine, there’s so much pressure.

And I thought, “That’s impossible. I’ll smash it.”

And she said “Exactly. You’re too tight. You’re going too hard. Give me everything you’ve got, all the focus, all the concentration. But back off a little on the effort”.